Nice Browns on the Nymph 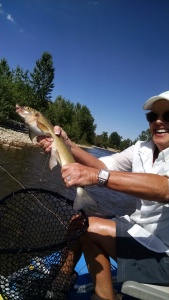 Here are some pics of the Stillwater and Yellowstone last week. We are catching fish nymphing (yes, with a strike indicator.) The Stilly in particular is producing some nice size brown trout on a stone fly nymph. A hare’s ear trailer is tagging good numbers of rainbows and whitefish. Check out the mondo whitey Molly caught on the Stillwater!

For you dry fly folks, there are some fish sipping the reddish-yellow mayfly spinners in the slicks on the Stone. A tan elk hair caddis caught trout sipping egg-laying caddis in the morning on the Stillwater yesterday. Nothing eating hoppers yet, but should start any day! 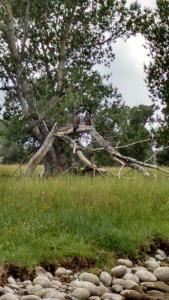 Baby Bald Eagles on the Stillwater

The dry fly bite is heating up on the Stillwater and Rock Creek. Fish are still looking for the big stonefly adults. The Chubby Chernobyl, yellow Stimulator and yellow PMX are all working well. 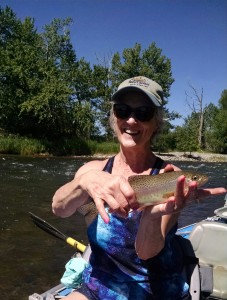 George only posts pictures of himself on Facebook, but Paula caught fish, too!

Area streams and rivers are starting to fish. The Stillwater and Yellowstone rivers are in great shape for float fishing. Rock Creek, the Rosebuds and the Clark’s Fork are in clear and fishing well. Wade fishing is going to be a challenge for a while longer, so respect the river at all times.

There are several kinds of mayfly in evidence along with yellow sallies, giant golden stoneflies and the big brown stoneflies. Fish are taking a big dry, with the yellow stimulator and yellow PMX being the best bet. Chubby Chernobyls are taking some fish as well. The fish have slowed down on the big stonefly nymphs. Small mayfly patterns are working best for a dropper or nymphed deep under an indicator. Montana prince, pheasant tail and standard prince are the best producers.