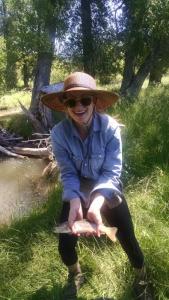 All area streams are dropping fast. Wade fishing is still very challenging on most. Red Lodge Creek is one of the first to be fishable every year, and this year is no exception. Rock Creek and it’s tributaries are beginning to come around. Stoneflies are still in evidence and several flavors of mayfly are available to trout as well. Not only are the big stones around, but yellow sallies are abundant. (Small, yellow stonefly. Imitate with a yellow elk hair caddis size 14, or small yellow stimulator). The size 14 prince nymph was the big winner on Red Lodge Creek this week.

Giant Golden Stoneflies on the Stillwater.

Hey out there! We usually don’t get to fish the Stillwater when the Giants are in full swing due to high water. This is one of the rare years that the water is clear this early. It’s still very juicy (high and fast). Wade fishing is very, very challenging. Float fishing is excellent. Fish ate the big dry fly well, but the dropper nymph was key. Try a Stimulator, Yellow PMX or any foam and rubber leg dry. The Montana prince and pheasant tail killed as a dropper. Stonefly nymphs took some bigger fish in the morning.

This beautiful Giant Golden was on my hat this morning. 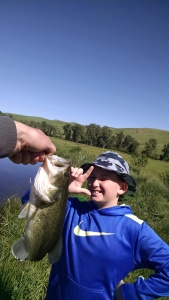 The bass were willing at the ranch this morning! Two kids caught their first fish on a fly rod. Doesn’t get any better than that.

Area rivers and streams are still swollen from snow melt, but are dropping. The Stillwater is clear and high, but floatable. It’s about 2300 cfs, which is well below average for this time of year. Not ready for wade fishing, but great for float fishing! The Yellowstone is dropping and clearing some, but it’s a long way from fishable. If you plan to float the Stillwater, try a stimulator, Jack Cabe or other stonefly dry with a rubber leg stone nymph dropped about two feet below it. Fish stonefly nymphs deep under an indicator if you aren’t hooking up. 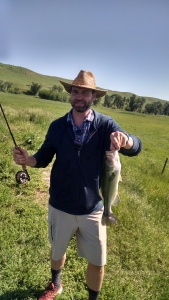 Due to the heat wave of the last week, area rivers and streams have risen. Flows have leveled out and even come down some in places due to today’s cooler weather, but expect them to remain unfishable for the next couple of weeks. My prediction is an early end to high water this season. That means the Stillwater should be ready to float fish by the last week in June. Wade fishing will remain a challenge into early July. The good news is that the lower elevation lakes are fishing well right now. The damsels and dragons are out early. Small wooly buggers in olive or black are a good bet to imitate the nymphs. Strip ’em slowly to imitate the natural fly swimming. Damsels are being taken dry as well. There is some mayfly activity in early morning. A parachute Adams should do nicely.