Fish are Looking for a Big Meal

Trout on the Yellowstone are definitely looking up for a big dry fly to fill up on! Stonefly season is transitioning nicely into hopper season. I’m still leaning toward the stonefly colors, like gold or brown. Having said that, we’ve been catching fish on peach the last couple of days (peach is more a hopper color). The usual suspects are working for a dropper: prince, pheasant tail, hare’s ear, etc. Streamers are working well on the windy, stormy days. Green crystal flash wooly buggers seem to be working best. The big stonefly nymphs, like a girdle bug, are still producing fished under an indicator.

Julie caught this nice rainbow on a hopper.

The Yellowstone Has Cleared

The Yellowstone has finally cleared up again. Fishing is good on the dry-dropper set up. A big stonefly imitation on top with a beadhead underneath got fairly ripped up on Thursday. The Stillwater is dropping fast. Wade fishing is getting better, with more riffles and other fishy features becoming evident. I’m still using the stonefly/beadhead combo. The big dry is getting eaten in the morning. Sunny afternoons are fishing best on the beadhead dropper. Look for the fish to get back on the dry in late afternoon, especially when the storms start to roll in.

Best flies are the yellow stimulator, tan otter hopper, and brown yellowstoner for the dry. Pheasant tails and prince nymphs are good bets for the dropper. 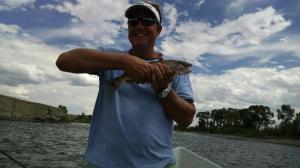 This brown ate the yellowstoner on the Stillwater! Is that legal?

Rock Creek Fish Are Looking Up

The trout on Rock Creek are looking for the dry fly. A size 10 Jack Cabe got ripped up all day. While the stonefly dry bite is winding down on the Stillwater, Rock Creek is just hitting it’s stride. A size 16 Copper John also killed it. There are several kinds of mayfly and caddis available, but the trout preferred the Cabe until around 4 PM. Some fish started rising sporadically at that time, but I couldn’t get them to eat anything. Tried all colors of parachute and a couple of elk hair caddis, but got totally ignored. I never did identify the natural they were eating.

Big fish for Rock Creek! Several in this range ate the Cabe.

Good Bite on the Nymph

Stonefly activity is slowing on the Stillwater. Pale Morning Duns should step up and fill the gap until hoppers take over. Some PMD spinners are in evidence, but no real afternoon hatch happening yet. (Yes, Pale Morning Duns hatch in the afternoon this time of year). PMD nymphs are active and ready for the show. A black nymph fished on the bottom produced best today on the Stillwater. Pheasant Tails, Prince Nymphs and other dark nymphs are the ticket. Fish are feeding in the riffles and drop offs. Not much activity on the bank water.

The Brown Trout just glow on the Stilly!

Stonefly Time on the Stilly!

The stonefly hatch is in full swing on area rivers and streams. Fish on the Stillwater are keying on the big dry fly. Dry fly action has been steadily increasing for the last week or so. The yellow Stimulator got torn up on Friday from morning till afternoon. With the advent of cooler temps, stonefly activity will slow down some, but mayflies might fill the gap until the sun shines again. There are several kinds of mayfly around this time of year, but Pale Morning Duns are usually the most prevalent. A yellow Humpy or yellow parachute pattern will get the job done if you see fish rising.

Maddie slayed ’em on the Stillwater.